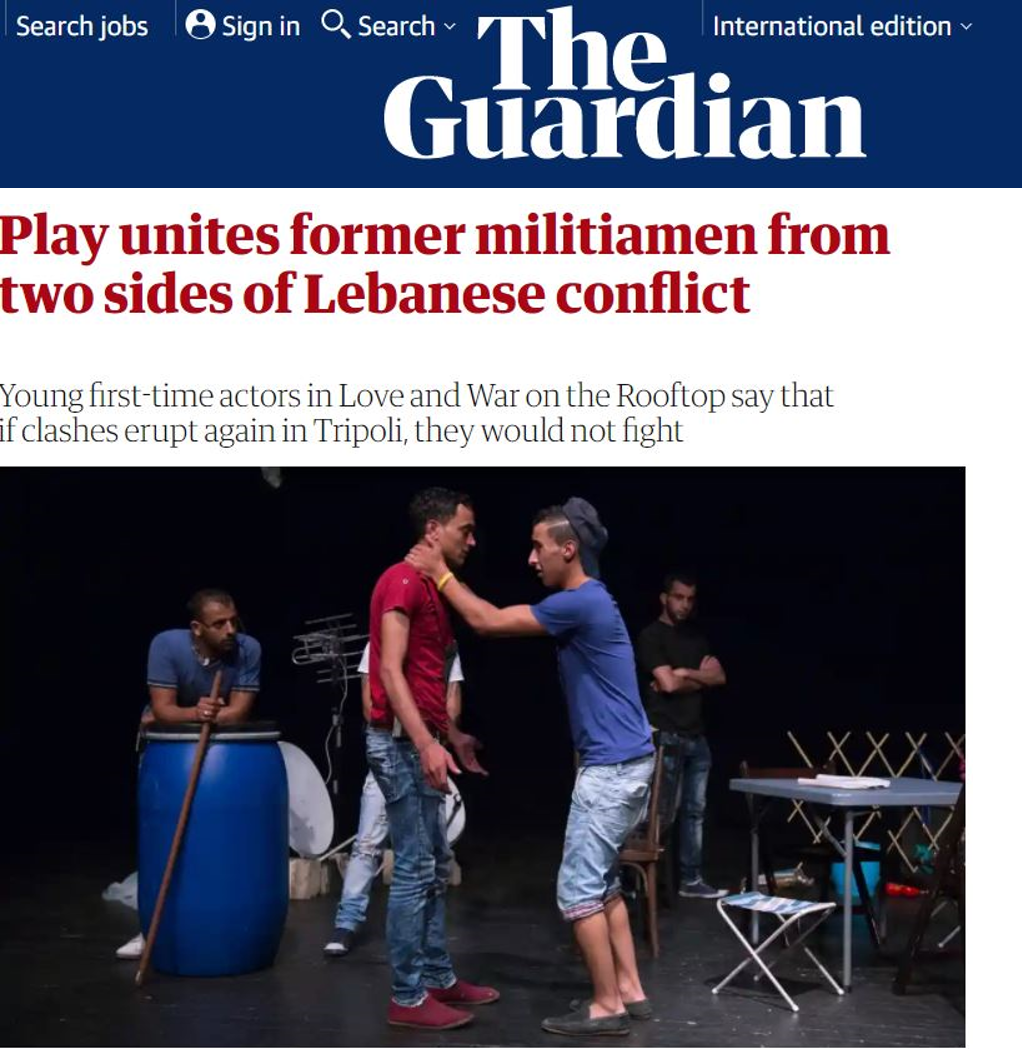 Young first-time actors in Love and War on the Rooftop say that if clashes erupt again in Tripoli, they would not fight

Rehearsal for Love and War on the Rooftop, at the Madina theatre in Beirut. Photograph: Dalia Khamissy Kareem Shaheen in Beirut Published on Fri 19 Jun 2015 17.34 BST

The militant stared down from the rooftop through the scope of his rifle. “I think I see a fighter,” he said. “That’s a 70-year-old man,” said the young man hiding behind him. “Well my father was 70 when they killed him,” the militant replied. “But you know,” countered the young man. “They say an eye for an eye makes the whole world go blind.”

That was the central message of Love and War on the Rooftop: A Tripolitan Tale, a play within a play that premiered this week in Beirut. The theatre production brought together former militiamen from Sunni and Alawite communities of the northern port city of Tripoli. It was a rare effort at reconciliation in Lebanon, a nation whose social and political fabric has been stretched to breaking point by the war in its larger neighbour Syria.

Tripoli has been a frontline of the war. Two impoverished neighbourhoods in particular – Jabal Mohsen, which supports Syria’s Alawite president, Bashar al-Assad, and the Sunni-majority Bab al-Tabbaneh, which backs the Syrian opposition – have engaged in a series of clashes that have left hundreds dead. The two neighbourhoods are separated by a single small road, Syria Street.Advertisement

“I thought everyone in Bab al-Tabbaneh was a terrorist,” said one of the Alawite youths who took part in the play. “But it wasn’t true at all. They are kids like us, poor like us, who have also been deceived, who have the same anxieties that we do.”

The theatre production stars 16 young men and women from Tripoli, who play actors struggling to put on a theatre production. Its story centres on Ali and Aisha, a Alawite man and a Sunni woman who fall in love. It is based on the true story of a cast member named Ali who married a Sunni girl from Bab al-Tabbaneh despite the objections of their families and Lebanese politicians.

The names have significance. Imam Ali, the prophet Muhammad’s cousin and son-in-law, is the most revered figure in Shia Islam, and the Alawite sect is named after him. Aisha is the name of the first caliph Abu Bakr’s daughter, who was married to the prophet Muhammad and later led an army that fought against Ali.

More radical than the play’s structure and the fact that it relies on youth who have never stood on a stage before is that it confronts the taboo concept of reconciliation.

Rehearsals for Love and War on the Rooftop. Photograph: Dalia Khamissy

Lebanon’s own 15-year civil war ended only because its participants exhausted themselves. A general amnesty was issued and many of the warlords whose militias perpetrated myriad atrocities still run the country. The fate of thousands of people disappeared remains unknown.

“This was the worst thing that happened to Lebanon,” said Lucien Bourjeily, the play’s director and scriptwriter. “The war never ended, I would say, but it got to a cold war.”

March, a Lebanese NGO that has worked on conflict resolution projects among local youth, had been looking into ways to address the problems in Tripoli. The organisation was concerned at the portrayal of the clashes as ideological and sectarian, when it believed they were mostly due to endemic poverty and lack of opportunities.

March approached Bourjeily to collaborate on a theatre production, and recruited the young actors from local communities, and arranged for them to take part in theatre classes under Bourjeily’s supervision, as well as workshops on conflict resolution and communication skills. Bourjeily chose not to impose a “foreign text” on them and drew on their real-life stories for the script.

“Some have never been to school and don’t read and write, so me coming in and talking about character and scene analysis and Molière and Shakespeare and all these things wouldn’t really matter,” he said before the final rehearsal session. “They would have walked out of the room.”

One Sunni teenager who took part in the play threw his first bomb when he was 13. He said of working with Alawites on the play: “I didn’t want to take part in it. The politicians who exploited us taught us that these are our enemies, but I had never seen them or dealt with them. But all those ideas changed when I came down and met them.”

Soon the actors were eating and drinking together and reading lines to each other, and had come to realise that they shared similar dreams and challenges such as finding a job and getting married. Now they say that if clashes erupt again they would not fight.

“I knew that if I went [to Jabal Mohsen] I should prepare to die, and if one of them came down he would die,” said the Sunni actor. “That’s how I thought before the play. But next time I go up there with [an Alawite colleague], we’ll get drunk, and then he’ll come over and we’ll also get drunk.”

He said his involvement in the fighting had not been motivated by sectarianism. “Someone would come to you and give you a bomb and tell you to throw it, and here’s 50,000 liras [£20] for the effort. We didn’t have work, so we did it. If you didn’t have a pack of cigarettes, you’d do it and take the 50,000. They taught us criminality.”

His Alawite colleague agreed: “If a Muslim kills a Muslim, he isn’t a martyr,” he said.

A preview in Tripoli drew a mixed Sunni and Alawite crowd and was well received. Bourjeily hopes its message will resonate not just in Lebanon but in Syria as well.

“We are affected by Syria so much,” he said. “I truly hope that this play and the vision and the image that these guys give when you see them on stage – Alawites and Sunnis together doing this creation – give a message not only to Lebanon but all participants in the war in Syria today. There is so much fear of the other in Syria today that makes it impossible for progress to happen.”

That vision was summed up in a melodious couplet at the play’s end: “We shall not go our separate ways, no matter how much they try / Aisha loved Ali, and sacrificed for him. We will not sully our hands, we are brethren / Sunni, Shia, Alawi, they must not fight.”

Go to link of the original article