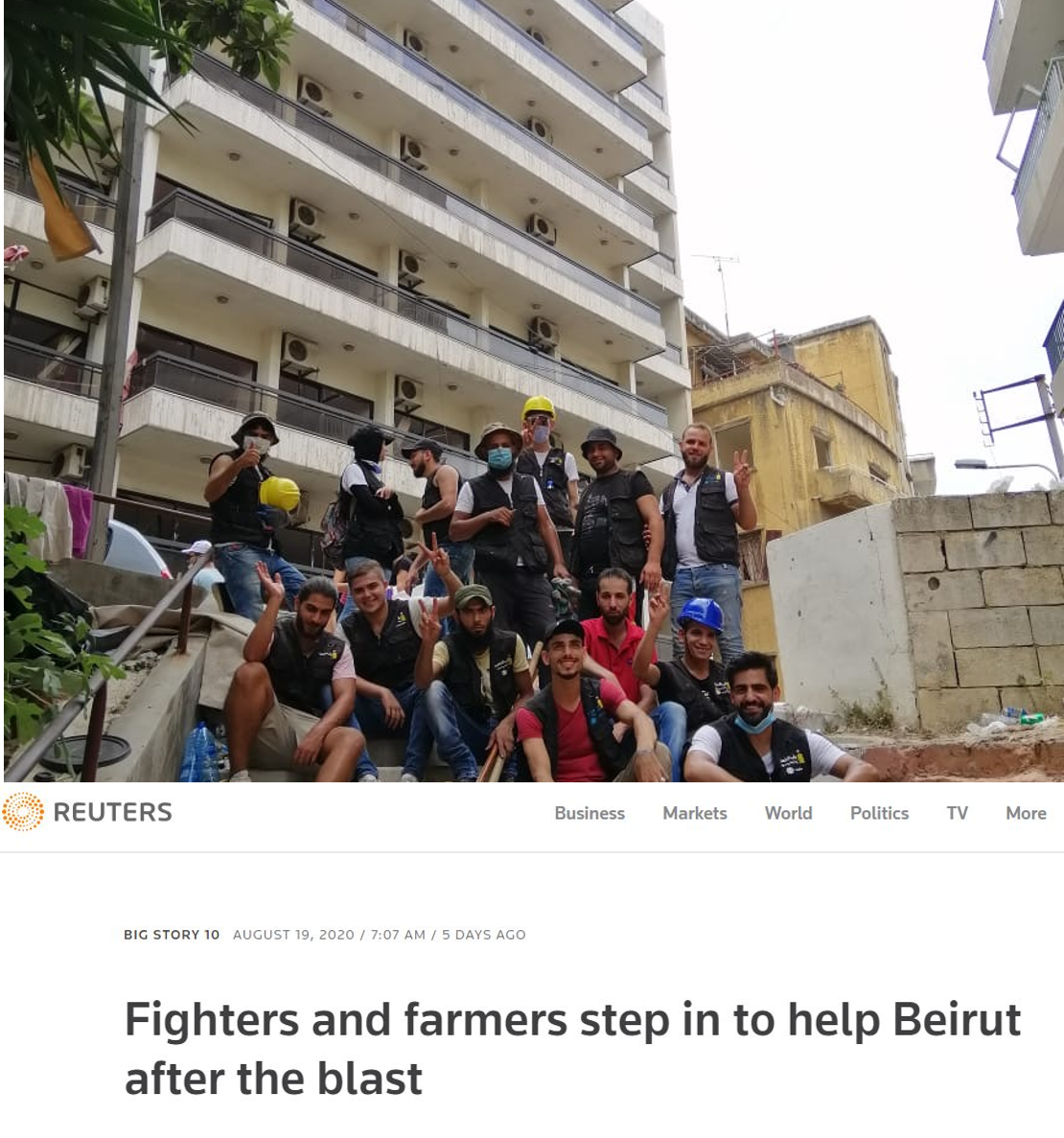 AMMAN (Thomson Reuters Foundation) – From former fighters repairing damaged buildings to rural women preparing meals, people from across Lebanon have stepped in to help businesses set up to do good after the seismic port explosion in Beirut.

The Aug. 4 blast, which officials have blamed on more than 2,000 tonnes of ammonium nitrate being stored unsafely for years, killed at least 178 people, injured some 6,000, and damaged buildings across a swathe of the city.

A list of social enterprises, or businesses set up with a mission to do good, already had teams working in construction and food preparation so quickly adapted and stepped in to help the nearly quarter of a million people uprooted.

This included about 40 former fighters from feuding towns in the northern city of Tripoli who learned building skills in a rehabilitation programme run by non-profit peacebuilding organisation March and construction firm Beb El-Dahab (BEDCO).

“It was so touching and heartwarming when they called to say ‘we want to come down and help, we don’t care about getting paid’,” said Lea Baroudi, founder of March.

Lebanon is still scarred by civil war three decades ago and reeling from a financial crisis rooted in corruption and economic mismanagement when the explosion ripped through Beirut.

Now the nation of 6.8 million people, which includes almost 1 million Syrian refugees, is also battling a surge in coronavirus infections, with the total number of cases at more than 9,330 since February, with 105 fatalities.

As Lebanon faced ever increasing social and environmental challenges in recent years, a rising number of social startups have emerged to tackle issues ranging from garbage disposal to clean drinking water.

According to the Makesense Organisation, which helps entrepreneurs solve environmental and social problems, in 2017 there were more than 200 social enterprises in Lebanon. No more recent figures were available.

Alfanar, a philanthropy organisation that supports Arab social ventures, launched a fundraising appeal for its network of social enterprises after the blast, adding March-BEDCO to the list so it could pay workers.

Alfanar’s Lebanon country director Michelle Mouracade said the country’s economic crisis had already disrupted the work of social enterprises that have had to cut staff and salaries, and slashed their revenues by 60 to 75% since October.

“It’s really difficult but at the same time, social entrepreneurs are by definition risk takers. They’re resilient and their mission is about finding opportunity when there are problems,” she told the Thomson Reuters Foundation.

Mouracade said people from vulnerable communities had come to depend on social enterprises to feed their families due to the financial situation, the coronavirus and now the blast.

“They live from the sales of their produce,” said Mouzawak who launched the social enterprise in 2004 to encourage sustainable agriculture.

“It was one of the most difficult moments of my life because how can I feel like I’m stopping everything?”

But with business at a standstill, Mouzawak was able to hire several cooks from Souk’s sister dining business, Tawlet, where women from various rural villages and underprivileged communities prepare meals, and launched an emergency kitchen.

From their undamaged kitchens, they are providing more than 1,000 meals a day for volunteers on the frontline and victims.

Mouzawak is hoping that a fundraising campaign for 500,000 pounds ($660,000) will rebuild ruined spaces and restore the financial lifeline for the teams at Souk el Tayeb and Tawlet that train and help migrant workers, rural women and refugees.

Mouracade said social entrepreneurs know how to act quickly in a crisis, as was evident at the outbreak of the coronavirus when businesses started to make masks and tap overseas markets.

“By providing people with love and support and understanding, you can see how things can change,” Baroudi said. “This is what we want Lebanon to be.”