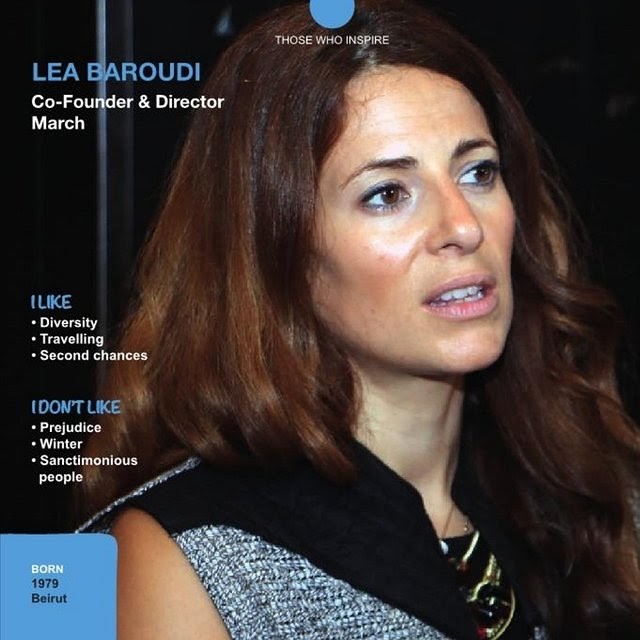 “With the right tools, you can put people on the right path. I believe in the good in people.”

Lebanon is a country of contradictions, a melting pot of different people, and this can be a great asset,” says Lea Baroudi, co-founder and director of March, but she’s reluctant to call Lebanon a paradigm of coexistence. “Since the war ended, we have treated it all as taboo: Let’s not talk about the past. Let’s act like nothing happened. But you cannot erase people’s thoughts and memories,” she explains. “This is why March works on fighting censorship and promoting freedom of expression, especially when it comes to art and culture. Art and culture can be cathartic, tools for truth and reconciliation, which are necessary for moving forward.”

Lea believes that there is still much work to be done to ensure that all Lebanese are empowered and to allow Lebanon to emerge as a model of true coexistence. Lamenting the fact that there are still young people in Lebanon being raised in poverty and marginalisation, conditions that some exploit to manipulate them into sectarian thinking, Lea notes that her own awareness of the divisive power of sectarian fault lines developed gradually. Growing up in a non-politicised household, her experience and understanding of the biases perpetuated by all sides didn’t come until her late teens and her time at university. But as her frustration with the situation grew, so did her realisation of just how deeply she loves Lebanon. “When I did my master’s in France, I realised that Tam very attached to Lebanon,” she admits, “and since I returned, I became very involved in all sorts of activism to make this country better.”

March was founded in 2011 with the aim of creating an empowered civil society through freedom of expression. Inspired by the inquisitiveness of Hercule Poirot, one of her favourite characters growing up, and motivated by the work of Zeina Daccache, who uses theatre to rehabilitate inmates, Lea decided to employ art in its various forms as March’s primary tool. One of their projects in some of the most deprived areas of Tripoli used theatre to reconcile youths on opposite sides of sectarian violence. “We ran auditions and recruited young men and women aged 16-24. We told them we wanted to do a play to show the rest of Lebanon how they live and what they go through. At first they used to come to rehearsals armed. It was tough,” Lea recalls. “But then we took them out of their environment and they started having fun together, getting on well with each other, telling each other’s stories because we told them that the play was inspired by their lives. And when they started to tell each other stories, they realised that they were much more alike than they thought; they started bonding.” The play was a success, and it also led to the opening of the Kahwetna Cultural Café, a platform for youth from both sides to meet, be exposed to art, learn, have fun and exchange stories and experiences.

The takeaway is simple: “We realised that the root cause of violence and conflict in a lot of these poor areas in Lebanon and maybe in other areas in the Middle East is not ideological. It is poverty, marginalisation, desperation. Giving people a sense of hope, allowing them to channel their frustration in more positive ways, breaks that cycle,” says Lea, adding that the key is to have patience and resilience, and to come into this work treating people as equals. “When you believe in them, they start to believe in themselves,” she points out. “I have met many people who have made mistakes and have been labelled, but there’s more to it than that. I believe that with the right

tools you can put people on the right path. I believe in the good in people.” And for Lea, it’s all about keeping at it, moving forward, changing the perspective: “Our collective efforts produce results. Stop saying Lebanon is not going to change. Stop saying there is nothing you can do to change Lebanon. Believe that we all have a duty to try and change something in our country or in the world, to make it a better place.”

IN SHORT March’s Co-Founder and Director Lea Baroudi is determined to help Lebanon reconcile with its past and move towards a future of coexistence. March uses art and culture to promote freedom of expression, diversity, women’s rights and conflict resolution, and to foster a more participatory and collaborative community in Lebanon. Despite tough odds, her efforts are paying off. “I’m not saying it’s easy,” she says, “but anything can change.”