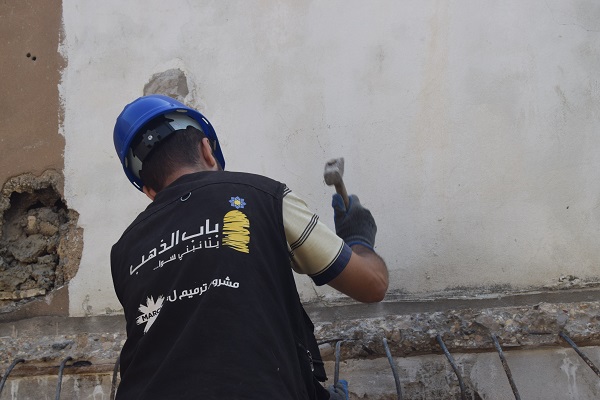 Due to Tripoli’s ecosystem, the area has constituted fertile grounds for conflict over the years. Local youth had been subjected to extreme socio-economic conditions that had made them susceptible to sectarian narratives. Furthermore, these individuals’ quality of life has been gravely impacted and their basic rights considerably impaired. They had difficulty accessing fundamental services such as education, healthcare and employment leaving them to face a lifetime of obstacles and pushing them towards violence and conflict. All these factors, coupled with the government’s semi-absence from the area, led violent clashes to erupt in 2011 between the historically feuding neighborhoods of the Sunni Beb El Tabbaneh and Alawite Jabal Mohsen.

MARCH recognized that CSOs often employed short-term relief strategies that had proven to be insufficient in countering the cross-generational sectarian resentment and the wave of violence the area had been witnessing. Therefore, the organization designed a holistic rehabilitation and reintegration program that targeted vulnerable youth from Beb El Tabbaneh and Jabal Mohsen. Beb El Dahab was created in 2017 with the goal of fostering long-term sustainable reconciliation. Its aim was to shift the distorted perceptions these youths had of “the other ” and enable them to transcend the false stereotypical perceptions they had inherited from their respective environments. Beb El Dahab’s goal was to try and breach the cycle of animosity and equip individuals with the tools to shift the trajectory of their lives. This would then help form a solid foundation to move towards social cohesion.

Beb El Dahab- dubbed “The Rebuilders Initiative”- recruited vulnerable youth such as ex-fighters who had taken part in the clashes, individuals who had been incarcerated and young women to give them a chance at a better life. It utilizes a diverse set of tools to build the participants’ soft and hard skills, create a common purpose, and develop resilience and foster acceptance. Under MARCH’s supervision, the selected groups are given on-the-job technical vocational training in different fields to allow them to be better equipped to integrate the job market. Participants apply the skills they are taught to actively take part in the rebuilding process of their communities. In addition to the professional capacity-building aspect, participants are provided with tools to better their well-being such as legal advice and healthcare support in addition to language and math classes. The program also offers periodic recreational activities and outings. Moreover, the youths participate in daily communal meals that encourage positive and constructive interactions.

The first phase of renovations targeted a marketplace that stood on the former demarcation line, Syria street. The men were in charge of refurbishing the shops while the women worked on designing and producing all the required branding material. This contributed to recovering over 354 shops that had been demolished by the war. Following the success of that initial endeavor, the youth took on the challenge of beautifying other spots such as the Muhajireen street where they managed to restore local authentic architecture. This allowed to enhance public spaces in key locations that once represented the separation of the two neighborhoods. Most recently, as part of MARCH’s goal to improve the dynamics between public institutions and local communities, the organization launched a partnership was launched with the Lebanese army. Youth from Beb El Tabbaneh and Jabal Mohsen worked hand in hand with the LAF to build a military training base for Tripoli’s 12th infantry brigade.

The success of the Beb El Dahab lays in its adaptability and inclusivity. It has also managed to generate a sense of safety, security and stability. Through it, MARCH has enabled the youth to develop cross-communal ties and improve their self-perception. Beb El Dahab also allowed these young men and women to find constructive outlets and coping mechanisms to deal with their trauma and anger. From a technical standpoint, it has also developed their employability and improved their quality of life. However, the program’s greatest achievement was perhaps the pool of community leaders it produced. Profiles that were once engulfed by sectarian dispositions have today become actors of change.

MARCH decided to adapt the cyclical model of social impact that was develop through to fit Beirut’s marginalized communities. The city encapsulates multiculturalism- a trait that has not always played to its advantage. Much like Tripoli, sectarian tensions remain quite prominent in the capital and traces of the civil war still gravely affect its most marginalized communities. In spite of the Beirut’s different context, we managed to replicate the concept by bringing together vulnerable youth from Chiah, Madina El Riyadiya and Khandaq Al Ghamiq for a unique community service initiative. The primary aim was to help build bridges between youth from different backgrounds and encourage better dynamics while developing their capacities and giving them the opportunity at a better future. Hand in hand the group renovated two of the Civil Defense Department of Beirut’s facilities. Similarly to Beb El Dahab, the project helped build the participants’ capacities through vocational on-the-job training in addition to languages and mathematics classes. The young men and women acquired a new set of marketable skills such as plastering, plumbing, graphic design and tiling – giving them an opportunity at a better future.

One thought on “GIVING YOUTH AN OPPORTUNITY AT A BETTER FUTURE”